Do you know what it means? 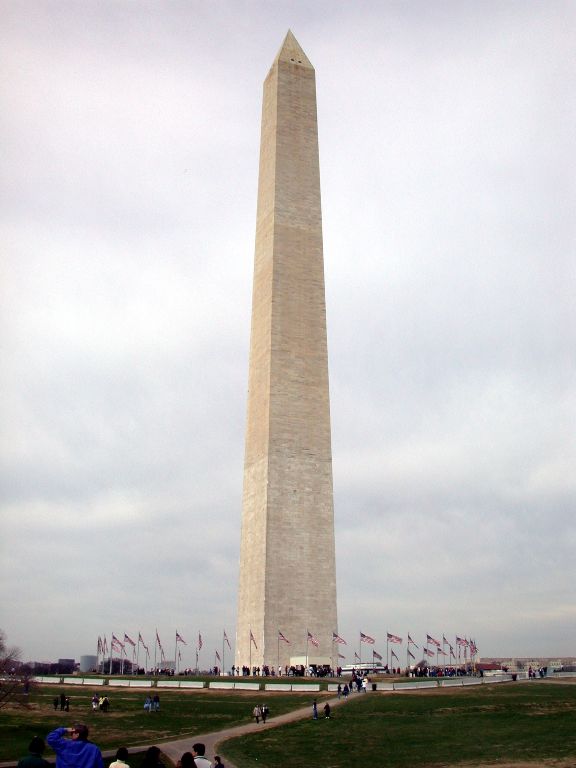 One detail that is never mentioned is that in Washington, D.C. there can never be a building of greater height than the Washington Monument.  With all the uproar about removing the ten commandments etc., this is worth a moment or two of your time. I was not aware of this amazing historical information.

On the aluminum cap, atop the Washington Monument in Washington, D.C., are displayed two words: Laus Deo. 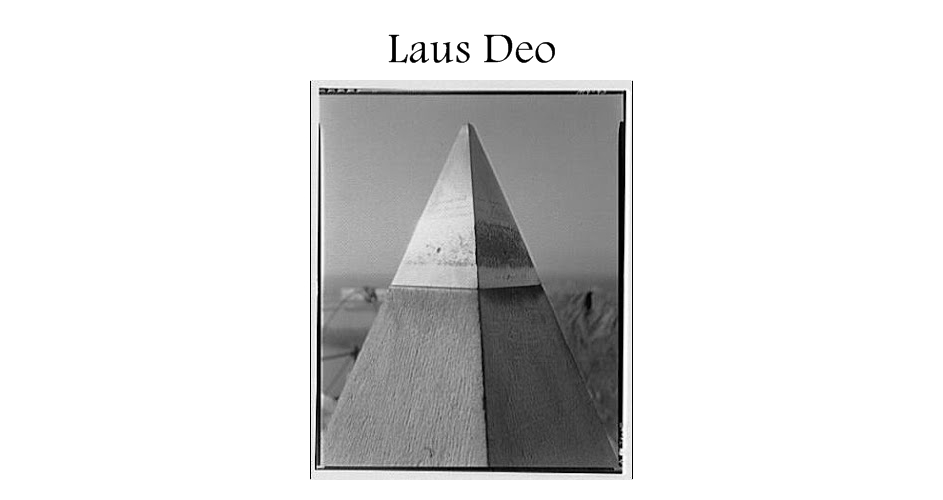 No one can see these words. In fact, most visitors to the monument are totally unaware they are even there and for that matter, probably could not care less.

Once you know Laus Deos history, you will want to share this with everyone you know. These words have been there for many years; they are 555 feet, 5.125 inches high, perched atop the monument, facing skyward to the Father of our nation, overlooking the 69 square miles which comprise the District of Columbia, capital of the United States of America

Laus Deo! Two seemingly insignificant and unnoticed words, out of sight and, one might think, out of mind, but very meaningfully placed at the highest point over what is the most powerful city in the most successful nation in the world.

So, what do those two words, in Latin, composed of just four syllables and only seven letters, possibly mean? Very simply, they say

Though construction of this giant obelisk began in 1848, when James Polk was President of the United States. It was not until 1888 that the monument was inaugurated and opened to the public. It took twenty-five years to finally cap the memorial with a tribute to the Father of our nation, Laus Deo ‘Praise be to God!’

From atop this magnificent granite and marble structure, visitors may take in the beautiful panoramic view of the city with its division into four major segments. From that vantage point, one can also easily see the original plan of the designer, Pierre Charles l Enfant …a perfect cross imposed upon the landscape, with the White House to the north. The Jefferson Memorial is to the south, the Capitol to the east and the Lincoln Memorial to the west.
Note:  It seems to be in the form of a cross, but there’s no evidence that was the intent of the designer, architect Pierre Charles L’Enfant.  If one sees the layout of White House, the Jefferson Memorial, the Capitol, and The Lincoln Memorial as the intended cross, it was not in the mind of Charles L’Enfant because he proposed the original design in 1791, which was long before it was decided that the Lincoln and Jefferson memorials would be built and where (1911 and 1934).

Praise be to God! Within the monument itself are 898 steps and 50 landings. As one climbs the steps and pauses at the landings the memorial stones share a message.

Where a memorial stone in the wall at the 140-foot level is located with the following blessing:

“May heaven to this union continue its beneficence.  May brotherly affection with union be perpetual. May the free constitution which is the work of our ancestors be sacredly maintained and its administration be stamped with wisdom and virtue.”

It is from Christians from the port city of Ningpo, Chekiang Province, Mainland China and is a eulogy to George Washington.

When the cornerstone of the Washington Monument was laid on July 4th, 1848 deposited within it were many items including the Holy Bible presented by the Bible Society. Praise be to God! Such was the discipline, the moral direction, and the spiritual mood given by the founder and first President of our unique democracy ‘One Nation, Under God.’

I am awed by Washington’s prayer for America. Have you ever read it? Well, now is your unique opportunity, so read on!

‘Almighty God; We make our earnest prayer that Thou wilt keep the United States in Thy holy protection; that Thou wilt incline the hearts of the citizens to cultivate a spirit of subordination and obedience to government; and entertain a brotherly affection and love for one another and for their fellow citizens of the United States at large. And finally that Thou wilt most graciously be pleased to dispose us all to do justice, to love mercy, and to demean ourselves with that charity, humility, and pacific temper of mind which were the characteristics of the Divine Author of our blessed religion, and without a humble imitation of whose example in these things we can never hope to be a happy nation. Grant our supplication, we beseech Thee, through Jesus Christ our Lord.. Amen.’

A note about Washington’s Prayer:

This “prayer of Washington” is widely circulated and reflects his true wishes about the United States because the bulk of it comes from his own words.

There is a certain lack of integrity with the prayer, however, in that he never really formally prayed it in the way that is circulated. Someone along the way decided to create the prayer from one of Washington’s letters and package it in the fabricator’s own religious cultural language.

The original words from Washington are from the closing paragraph of a letter to the governors of the 13 states on the occasion of his retirement from command of the Continental Army and public life.  We consulted John C. Fitzpatrick’s collection of the writings of George Washington that are available through the University of Virginia Library and which includes the text of the letter.

In the letter, Washington said that he wanted the governors to convey his words to their legislatures and that he hoped it would be regarded as coming from someone who always wished to be useful to his country and who in the shade of retirement would not fail to “implore divine benediction upon it.”

Then his final paragraph contains the words of his benediction:

The prayer that is circulated, however, adds a formal salutation and prayer ending, changes it to King James English (used for formal prayers among many Christian groups), changes some of the wording, and leaves out words from the original.   A blessing that was written to the governors of the states about their states and their soldiers was changed to be a general prayer about the country.

We even found one reference that claimed the prayer was prayed by George Washington during battle at Valley Forge.

When one stops to observe the inscriptions found in public places all over our nation’s capitol, he or she will easily find the signature of God, as it is unmistakably inscribed everywhere you look. You may forget the width and height of ‘Laus Deo ‘, its location, or the architects but no one who reads this will be able to forget its meaning, or these words: ‘Unless the Lord builds the house its builders labor in vain. Unless the Lord watches over the city, the watchmen stand guard in vain’ (Psalm 127: 1).