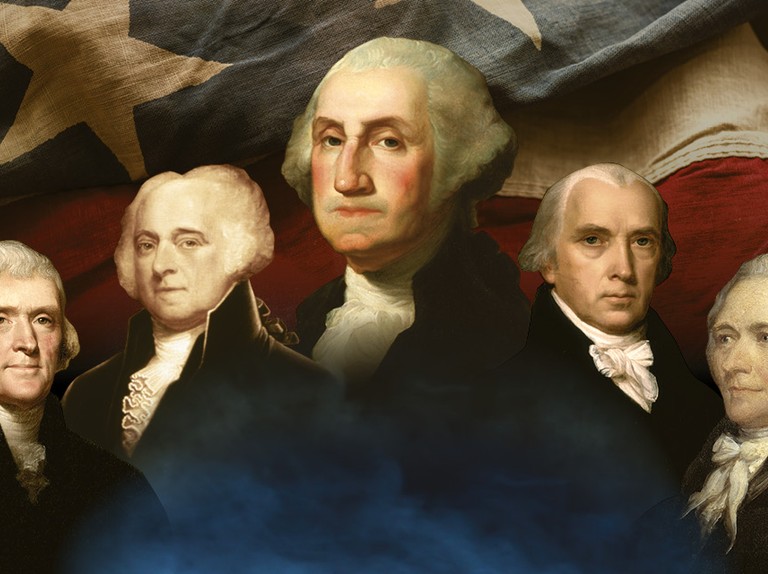 An American, Silvana Lupetti, saw a vision of our American heritage being brought to us on a silver tray, engraved by Paul Revere. The tray was large and rectangular with handles on the sides, and the figures of the 56 signers of the Declaration of Independence were engraved on the raised edges. In the center of the tray was inscribed in old-fashioned script, LIBERTY THROUGH GOD. In the vision, Jesus had the tray in his hands and was bringing it to us.

Many Americans are unaware that General George Washington, while at Valley Forge in 1777, also was given a vision from God. This vision is recorded in the Library of Congress. At the end of the vision, the angel from God says to General Washington, “Son of the Republic, what you have seen is thus interpreted: three great perils will come upon the Republic. The most fearful is the third, but in this greatest conflict the whole world united shall not prevail against her. Let every child of the Republic learn to live for his God, his land and the Union“.

Our heritage is that we are one nation under God. Now the American people need to come together to ask God to lead us. This is not a question of churches or denominations or political parties but of WE THE PEOPLE of America asking God for help. The Tea Parties must ask Him to lead, all Americans who care must ask Him to lead, for we need His healing as did our Founding Fathers. And is we ask Him, once again, He will come to our aid. We must never forget our heritage, or be deceived that it does not exist as one nation under God.

“It cannot be emphasized too strongly or too often that this great nation was founded not by religionists but by Christians, not on religion but on the gospel of Jesus Christ.”
Patrick Henry – May 1765

“In the beginning of the contest with Britain, when we were sensible of danger, we had daily prayers in this room for Divine protection. Our prayers, Sir, were heard, and they were graciously answered… do we imagine we no longer need His assistance?”
Benjamin Franklin
Constitutional Convention
June 28, 1787

We Recognize No Sovereign but God, and no King but Jesus!
John Adams
John Hancock
April 18, 1775

“Almighty God, we make our earnest prayer that Thou wilt keep the United States in Thy holy protection, that Thou wilt incline the hearts of the citizens to cultivate a spirit of subordination and obedience to government, and entertain a brotherly affection and love for one another and for their fellow citizens of the United States at large. And finally, that Thou wilt most graciously be pleased to dispose us all to do justice, to love mercy, and to demean ourselves with that charity, humility, and pacific temper of mind which were the characteristics of the Divine Author of our blessed religion, and without an humble imitation of whose example in these things, we can never hope to be a happy nation. Grant our supplications, we beseech thee, through Jesus Christ our Lord. Amen.”
George Washington
written while he was President
at Newburg, June 8th, 1783
and sent to the governors of all the states

The first prayer in Congress, given on Sept 7, 1774, ended with the words, …all this we ask in the Name and through the merits of Jesus Christ, thy Son and our Savior.

Clearly our Founding Fathers were not afraid to be one nation under God, and God heard them and helped them to found this great nation. Let all children of the Republic today, who care about our God and our country, come together and seek His leading and His help, and stand together for our freedom.

Share our American heritage with your children, with your friends, with your neighbors. Here is the prayer that was taken out of our schools: “Almighty God, we acknowledge our dependence on Thee, and we beg Thy blessings upon us, our parents, our teachers and our country.” Was that simple prayer, given by American children, really so offensive and harmful to our children? No, it wasn’t. God help us to keep our noble heritage and God bless all who join the fight for freedom.

“These are the times that try men’s souls. The summer soldier and the sunshine patriot will, in this crisis, shrink from the service of his country; but he that stands it now, deserves the love and thanks of man and woman.” – Thomas Paine